Cursed Commercials Wiki
Register
Don't have an account?
Sign In
Advertisement
in: Commercials aired in Pakistan, 2000s, 2004,
and 21 more

In 2004, McDonald's Pakistan released a Happy Meal set featuring LCD Sonic the Hedgehog games. They advertised the set with this infamously-bad commercial in Urdu.

Get a Happy Meal
Do McDonald’s Sega Games line!

Play and have fun, to the fullest extent/your heart's desire!
Make lots of commotion!
And tell your friends too!
Let's go eat a Happy Meal!

Let's go, let's go to McDonald's
And get the Sega Games line!

(After the commercial, the "I'm Lovin' It" jingle plays)

The advert is infamous for the horrible designs of the characters, and the 3D animation in general. The worst offender of this is Rouge the Bat, who is designed more like a naked mouse. Some of the games shown don't even have the labels textured on the models.

The official Sonic the Hedgehog Twitter account actually referenced the ad on a post with the image of the French Sonic Happy Meal, describing it and the latter as "creepy foreign commercials." 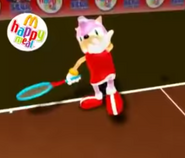 Rogue the Bat... or mouse

Community content is available under CC-BY-SA unless otherwise noted.
Advertisement